Hello everyone! Here is my next Inktober instalment. Today’s word for this one was “United”. Today just wasn’t my day… 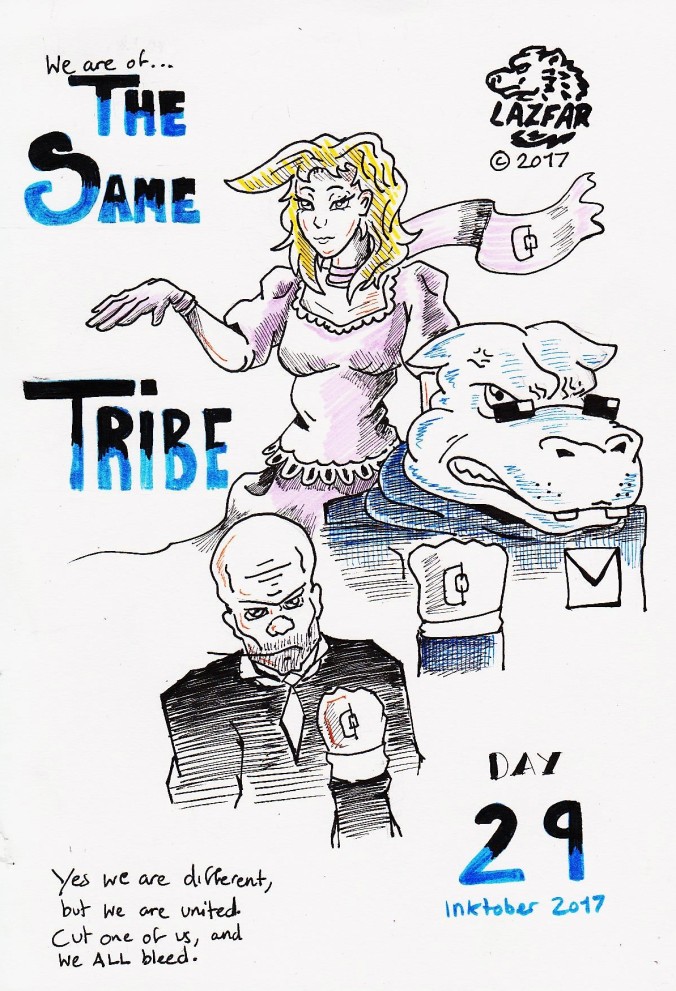 The Same Tribe: Not what I wanted it to be…

What should I say? This is another disappointing mess that is freshly destined for Kak – up corner. I just didn’t have the strength or the time to pull this off. Believe it or not, I had a wonderful idea, and it was supposed to be in this format, but I’m just so knackered out of my skull… and it is beginning to show for sure now.

I’m feeling slightly relieved that this challenge is coming to an end if I’m being honest, but I don’t want to end on a low, so I’m going to try and forget my embarrassment to hope that I do better tomorrow.

Regarding this piece, my main struggle was by far the woman’s hair. I have no idea why, but I just got stuck. I tried to give her a typical large aristocratic type hair style, but the more I’d try and do that, the more she would look like Dolly Parton. I was singing the song ‘9 to 5’ in my head whilst figuratively weeping to myself… It was painfully tough to make any sort of comeback.

This piece (looking beyond the badly done mess) is about what it means to be united even when you’re different. I remember fond memories of the past where I had a group of friends and we were all different, and yet, with such diversity, came a very strong bond. We were like family, and it was beautiful to be part of that.

For translation and clarity, the text in this artwork says: “We are of THE SAME TRIBE. Yes, we are different, but we are united. Cut one of us and we ALL bleed.

Now…Time for my Back 2 The Liner story. See below.

To prevent early spoilers, please find the description of the episode below.

In this episode, the king, Captain Terrier, strikes back as he intercepts an attack from Poison and then sends him flying through the air. Meanwhile, Graceful Sophie walks out after having been released from capture herself. Holding Boundhund’s offspring, she raises her into the air and the she wolf pup begins to glow…

For translation and clarity, the text reads: “Poison takes notice of Captain Terrier and attempts to lunge at him… But he was wrong to try. SMASH! Poison gets knocked flying! And that’s not all. Graceful Sophie has been released still holding Boundhund’s daughter. UNITED in resolve, Sophie calmly walks outside. She raises the pup into the air and, just like Boundhund used to do, the she wolf pup glows with a mysterious power…”

Ahhhh…. I’m so tired… I can’t tell you how exhausted I feel and its starting to impact my work. I need sleep!

I’m off for now, but I do hope I’ve done this episode justice. And as usual, I hope you enjoy my entries. See you next time for the next word “Found”!